Dying his dark hair blonde and shaving his beard down to a goatee for a retro reunion gig seemed like a good idea to singer Eric Erdman–until he looked at himself in the mirror the next morning. Unimpressed, he shaved his head, because bald was better than blonde. That should have been the end of it, but then he dropped his wallet into the brackish water of Mobile Bay during a sailing trip. “Now I have to get a new driver’s license with the picture of my bald face and bald head,” says Erdman. “This is not a look I want to see each time I pull out my license. My life is bit of a circus, but I always give myself something to write a song about.”

Tall and gregarious with blue eyes that flash with laughter, mischief, and kindness, Erdman is a natural entertainer and draws listeners in to his songs and stories like he is sharing them with old friends.  “I am a happy and optimistic guy and I love the interaction with people,” says Erdman. “When I am on stage, I am telling stories to the audience, I don’t want to be just talking to myself. If the audience is paying attention, and getting the punch lines and the meanings of the lyrics, we are in it together. In each show, I look for who is listening so I know where to aim the songs, even if it is for only two people in the back while 98 others have their backs turned.”

Erdman was three years old when he made his first public performance. “I was the ring bearer at my cousin’s wedding,” he says. “During the reception the band took a break and I took this as a sign that they needed help. I climbed on stage, but I was too small to reach the microphone. The band backed me up on the only two songs I knew, ‘Zippety Doo Dah’ and the theme song to the Dukes of Hazard. I was trying, and failing, to win the attention of the flower girl, so since the age of three, I have had a similar effect on women with my music.”

Five years later, Erdman played in bands at parties, and a friend’s dad gave him the chance to play at Southside in Mobile (now the Alabama Music Box). “They liked our music and we started playing at Southside on weekends,” says Erdman. “We got lucky and one gig led to another and all of a sudden I was playing 30 gigs a month either solo or with the band The Ugli Stick.”

Erdman was more than a musician in high school and college. He was also a self-described math and science nerd and earned a degree in math and statistics from the University of South Alabama. “I started playing in bands in college,” says Erdman. “The economy was good and it was a great time to be a musician in Mobile. By my junior and senior year I was making more money that I would have made with a real job. By then, I knew I was going to be a musician and I would never use my degree, but I had caused my brain so much pain that I had to finish.”

Today, he is a full–time singer/songwriter who takes his guitar everywhere he goes and writes music every day. “It is easy to write songs when you have a first love, or your parents get divorced, or you go through a cataclysmic event,” explains Erdman. “But I also want to be affected by the smaller things like when someone cuts me off in traffic. There is always something to write about because there is something that affects me every day, funny and happy or serious and sad. I like to write songs with punch lines because they provide a spark in a song, especially when I am playing them for an audience. I am working on one now with the punch line ‘I married her for her looks, but not the ones she is giving me lately’.”

Erdman is a life-loving optimist with a knack for punch lines, but he can fill any song with the pain of heartbreak or the joy of revival. His warm, honeyed voice is filled with melancholy shadows, bluesy turns, and country ache that can still soar over harmonies. He sings every line with a sincerity that feels like an intimate confession of a man sensitive to the emotions of life.

Cancer almost silenced Erdman’s music before it began. When he was fourteen, he rolled his ankle and it would not heal. Doctors told him he had a cancerous tumor and he would not survive it. After surgery, the doctors told him the leg would not grow anymore and it would be shorter than the other leg.  But the leg grew, and the next year Erdman led his baseball league in stolen bases.

“Cancer gave me a new perspective on life,” says Erdman. “I would not be close to the same person I am now. I can poke fun at life and myself. Relationship drama is not life-ending because I have already lived through death. Bad gigs, broken cables, and busted amps are no reason for stress because it ain’t bone cancer.”

Erdman’s new album, Color the Silence, was recorded early this year while touring in Australia. He tells stories of breakups and complicated relationships, but the title song is one of Erdman’s few songs about the giddiness of love.

“Color the Silence” is about the infatuation stage of a relationship and staying on the phone all night talking about nothing when you should be sleeping. The song was co-written in Nashville with Dale Drinkard, Jr. and Amanda Williams. “The idea for that song was sparked when the three of us were looking at the stars and Dale said what colors the silence matters more than what is being said. The story then presented itself. “Color the Silence” is a unique song in my catalog. I have a lot of break up songs about this is how she done me wrong and good riddance. I can get four songs out of one breakup, but I don’t have many sugary sweet songs. The song also has a double meaning about taking the mundane and adding some spark to the way you view the world.”

It’s not what we say, it’s how we color the silence.

I swear anything I said about wanting her you can disregard.

No, I changed so quickly I am in a state of shock.

I remember begging her to come to my house and now I am trying to change the lock.

Erdman is developing his voice as a songwriter, even if he has to use a little profanity to make his point.  “Lucky (El Paso)” tells of an “Asshole from El Paso, an SOB from Tennessee” in his observation that not all Yankees are bad and not all southerners are nice. “You can’t change the words or tone it down,” says Erdman. “’I know this not-so-nice person from El Paso’ doesn’t sound right and doesn’t make sense. It has to be ‘Asshole from El Paso’ or it doesn’t fly. To me, funny trumps everything, and when it is funny like that, I’ve got to say it. Because of this song, the album was tagged with a warning for explicit lyrics. I never intend to offend, but if I would say it, I will also sing it.”

Singing and songwriting are different skills and Erdman gives himself to both. “Songwriting is a way to get your emotions and ideas out,” he says. “Singing is the application and seeing how people connect with your ideas. You take a song from nothingness to form a concept and then put it out there to resonate with other people. It still gives me chills to hear people sing those songs back to me and it makes me feel at one with my surroundings. Whatever ways we differ, we are all connected together in that moment.”

Color the Silence is the second album in his solo career but he has played with the Mobile band Ugli Stick for almost fifteen years.  “Solo singer-songwriter is my essence, but I put that on the back burner for many years to play with the band,” says Erdman.  “I am now happier that I get to play with the band and play on my own and be two different people. With Ugli Stick I get to jump around and get loud and rowdy and rap. I even get calls to rap on other people’s albums such as the song “Old Shoes” on Sonny Bama’s latest album.”

Fulfillment in different styles of music reflects Erdman’s need for variety and change. He calls himself a road dog and enjoys seeing the world through touring, still studies science to learn something new, and is not afraid to change his hair and clothing style. “I am an explorer and adventurer,” says Erdman. “However, the older I get the changes become less drastic.”

One thing Erdman won’t change is his hometown of Mobile. He writes about the city in his songs and creates music projects here like Port City Rising with his good friend Catt Sirten. “My whole family is in Mobile and the people of Mobile have been so supportive of me from the very beginning,” says Erdman. “They have been my backbone which allows me to generate enough money to write songs and tour. I can risk booking shows in places like New York where I don’t have a fan base yet.”

The new album is a new opportunity for Erdman to travel with his music. During the rest of the year he will tour the U.S., Belgium, Germany, and return to Australia.

“It is mind-boggling how many places this guitar has taken me and I try very hard to stay on the moment and not to take it for granted,” says Erdman. “Even the slightest, smallest gig is incredible when I am playing in Australia. I don’t have much money and I am the brokest of all my friends, but when I look at my life experiences and the places I have been, I have it pretty good. I am only broke in money.  For me, I am in the most successful time in my life. Every gig, every recording project, every person I play with makes me as happy as I can be.” 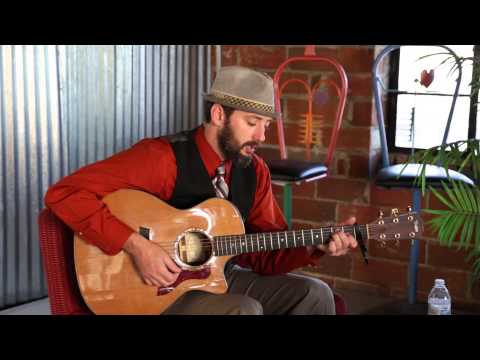